Role of higher education in revolutions was theme of international conference at UCD.

Student and academic revolts, from the 1790s up to the present day, featuring the French student uprisings of 1968, Easter 1916, and other major protest movements which led to the emergence of new states, were explored in an international history conference in Dublin in June of 2015.

Organised by UCD, the event was open to the public and held in Newman House on St Stephen’s Green over two days on Friday 5th and Saturday 6th June. Entitled Universities in Revolution and State Formation the conference examined the role played by universities, both their staff and students, in social, cultural and especially political change, from the early modern to the contemporary. The event was part of the University’s Decade of Centenaries programme which was launched by Minister for Arts, Heritage, and the Gaeltacht Heather Humphries in April 2015.

The conference was recorded for podcasting by Real Smart Media and these podcasts are now available via History Hub’s podcast channels on Soundcloud and iTunes.

The conference was generously funded by the Irish Research Council’s New Foundations and UCD’s Seed Funding Programme: Decade of Centenaries Internal Award Scheme 2014 and supported by UCD’s Centre for War Studies. The keynote address was given by Dr Renate Marsiske of the Universidad Nacional Autonoma de Mexico. The Mexican Ambassador to Ireland, His Excellency Carlos Garcia de Alba, was in attendance for this session. The conference was opened by Professor Orla Feely, Vice-President for Research, Innovation and Impact at UCD, and Chair of UCD’s Commemorations Committee. 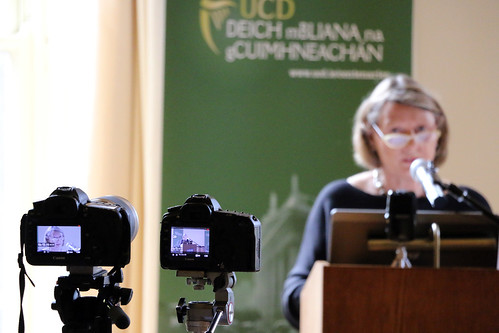 The conference explored how, in the early stages, universities often acted as the forum for debates and had a guiding influence on events. It examined how, despite often central involvement in revolution and state formation, students and academics – especially the latter – often subsequently act as a restraining or moderating influence on these movements.

Noted academics also discussed their personal experiences on the barricades. “By enquiring into the role of activist/witness, the conference reflected upon these more recent events and provided an open space for discussion of their successes, failures, and significance” commented conference organiser Dr Conor Mulvagh, Lecturer in Irish History with special responsibility for commemorations at University College Dublin.

Dr Francesca Frisone (University of Messina)
The Sicilian Universities between 1812 and 1848: political activism and training of the élites

Panel 3: Identity, nation, and the university

Ruairí Cullen (Queens University Belfast)
‘[T]rue history must be written from within’: History honours at the Irish universities c.1890-1910

Dr Matt Perry (Newcastle University)
“Will He Be One of the Unemployed”? Student discourses of work, anti-work and unemployment in the revolt of May 1968.

Tweets from the conference

Thanks to @timeshighered for covering #URSF15 and check out @HistoryHub_ie for conference podcasts in the autumn. https://t.co/mK9M6QdCBl

Abraham Lincoln (Episode 5: With malice toward none)

David Rieff: In Praise of Forgetting

Carla Rahn Phillips: The Struggle for the South Atlantic

Tamar Herzog – Frontiers of Possession: Spain and Portugal in Europe and the Americas