The Abbey of St Thomas the Martyr was dedicated to Thomas Becket, Archbishop of Canterbury, who had been murdered in his cathedral by Henry II’s knights in 1170. Becket was canonised in 1173, and the abbey in Dublin was founded shortly afterwards as an act of restitution by the king.

The Abbey of St. Thomas the Martyr was founded in the 12th century and played a pivotal role in the religious and political affairs of Dublin city until its dissolution in 1539.

The abbey was dedicated to Thomas Becket, Archbishop of Canterbury, who had been murdered in his cathedral by Henry II’s knights in 1170. Becket was canonised in 1173, and the abbey in Dublin was founded shortly afterwards as an act of restitution by the king. The abbey gave Thomas Street its name, and had a major influence on Dublin while in operation.

While no trace of the abbey remains, Dublin City Council’s South Central Area office and Dublin City Archaeologist Dr Ruth Johnson have been working to unravel the mysteries and bring the abbey back to life. A weekend of events celebrating the abbey took place in October 2017. As part of the celebrations, a symposium on the history of the abbey took place in St Catherine’s Church, Thomas Street on 14 October. Podcasts from the conference were produced by Real Smart Media and are now available on History Hub. 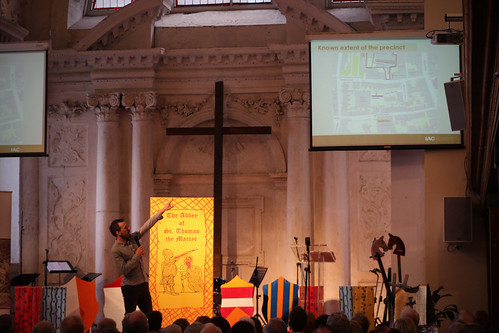 Speakers who gave presentations at the symposium included:

The full conference programme can be found here.

Listen to the podcasts on Soundcloud or download them on iTunes. Please note that many of the speakers reference slides in their presentations and these slides are available to view below.

Slides referenced by the speakers

Paul Duffy. The Sacred and the Profane – preliminary results of archaeological excavations at 30 & 32-36, Thomas Street.

Colmán Ó Clabaigh. For the Love of God and Neighbour: the lifestyle of the Canons of St Thomas’s Abbey.

Áine Foley. St Thomas’s Abbey and the City of Dublin in the late medieval period.

Roger Stalley. The Augustinians and their architecture.

Martin Sheridan: the life of an Irish-American Olympian

Kingdom, Empire and Plus Ultra