By Abigail Smith (MA in Public History at UCD)

This post includes three speeches from UCD Digital Library’s launch of the digitized collection of the Dublin Metropolitan Police and Civic Guard (Garda Síochána) Personnel Registers which was hosted at Dublin Castle on 29 January 2018. Included are speeches from Acting Garda Commissioner Dónall Ó Cualáin, Associate Librarian of the UCD Library Carmel O’Sullivan, and Diarmaid Ferriter, Professor of Modern Irish history at the UCD School of History. This event, attended by historians, members of An Garda Síochána, and descendants of those recorded in the registers, highlights the efforts of UCD library, An Garda Síochána, and members of the public to preserve and make accessible an important piece of police and Irish history. 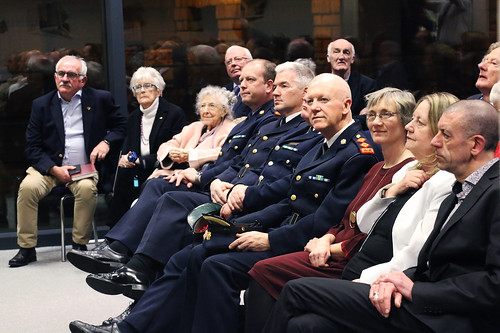 This collection is the second of two collaborations between the UCD Library, UCD Digital Library and the Garda Museum and Archives. This partnership has resulted in not only the digitization of these records, but has also made publicly accessible the Dublin Metropolitan Police Prisoner’s Books, which is available through the UCD Digital Library.

The newly released digitized volumes include the first 252 pages of the Dublin Metropolitan Police General Register, which contains 12,567 entries from 1837 to 1925. The second volume, The Civic Guard (Garda Síochána) Temporary Register contains a register of recruitment for applicants from February 1922 to September 1924, as well as a separate record of members who joined from Oriel House. Both registers are publicly accessible thanks to the UCD Library, UCD Digital Library, and the Garda Museum and Archives. They can be accessed at the UCD Digital Library website.

In 1922, following the war of Independence and acceptance of the Anglo-Irish Treaty, the RIC was disbanded. The Civic Guard, or Garda Síochána, which had been formed in 1921 by Michael Collins and the Irish Government, would take its place as Ireland’s police force. This new force would include members of the disbanded RIC, the DMP, and the IRA. The DMP then merged with An Garda Síochána on the 3rd of April 1925.

The now-digitized register of the DMP includes information on the recruitment and transfer of policemen from 1837-1925. Included in the documents are details about the men who served in the force. This includes details such as name, age, height, former occupation, and even religion. Following the merger of the DMP with An Garda Síochána in 1925, the register was used to document the movement of the new police force into the Dublin Metropolitan Area. Although the general register continued to be in use until 1975, entries past 1925 have not been made publicly accessible for data protection reasons.

The Civic Guard (Garda Síochána) Temporary Register includes information on the recruitment of rank and file members into An Garda Síochána from February of 1922 until September of 1924, listing the first 6,042 members. The details of this register include information such as names, addresses, date of joining, and details of any previous experience in the IRA, RIC, or army. The register also includes information on recruits such as details on dismissal, retirement, or any changes in rank. A separate record also documents members who joined An Garda Síochána from Oriel House, the Criminal Intelligence Department, the last entry for which is in May of 1929.

These registers give important insight into the lives of the men who served in the DMP and An Garda Síochána. They document a time of great change in Ireland’s history and provide a significant resource to historians, genealogists, and the general public.

Jim Herlihy, The Royal Irish Constabulary: a short history and genealogical guide: with a select list of medal awards and casualties (Dublin, 2016)

History Hub presents historical documents from the archives with analysis from historians. You can view the original documents and come to your own conclusions.

The Irish at Gallipoli by Jeff Kildea

Ben Vinson: Mestizaje and the Frontiers of Race and Caste in Colonial Mexico

Abraham Lincoln: The Life and Death of a Statesman

The Irish at Gallipoli (Episode 1: Background)