How do you commemorate a civil war? How do we approach the next part of the ‘decade of centenaries’ on both sides of the Border.

Commemorating Partition and Civil Wars in Ireland, 2020-2023 is a project run by Dr Marie Coleman and Dr Dominic Bryan at Queen’s University Belfast. The project, which is funded by the Arts and Humanities Research Council, examines approaches to the 2020-2023 period of the ‘decade of centenaries’, on both sides of the Irish border.

Since the project’s inception in 2017, four events have taken place in Queen’s University Belfast:

In her introductory comments at the project’s first event – Civil Wars and their Legacy – Dr Coleman, quoting Tom Hartley, former Lord Mayor of Belfast, remarked that: “1916 is the easy bit. The hard bit is going to come when we look at 1920-1923”.

Engaging the public with contested history is one of History Hub’s core objectives and we have partnered with the project to produce freely accessible podcasts from project events. These podcasts, produced by Real Smart Media, are now available on History Hub, as well as on iTunes and Soundcloud.

Civil Wars and their Legacy

Civil Wars and their Legacy brought together a number of leading historians to Queen’s on 10 March 2017, to explore these, and other issues related to the Irish Civil War, the Finnish Civil War and the history of civil wars generally.

All four papers at the conference were recorded for podcasting by Real Smart Media and are now available on History Hub. The speakers were:

Dr Tuomas Tepora (University of Helsinki)
The Finnish Civil War and its legacy, 1918

Civil Wars and their Legacy was organised by the AHRC-funded project Commemorating Partition and Civil Wars in Ireland, 2020-2023, in conjunction with Queen’s University’s School of History, Anthropology, Philosophy & Politics, the Institute of Irish Studies and the Senator George J. Mitchell Institute for Global Peace, Security and Justice. 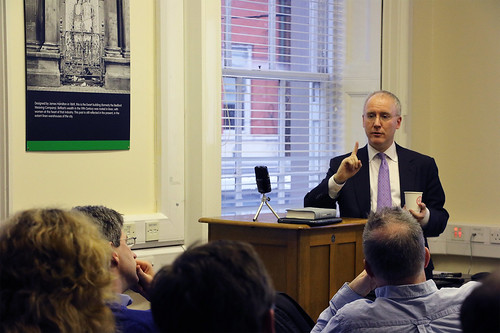 The speakers at the conference were:

Stover visited Queen’s University Belfast in October 2017 to give a paper at an event jointly hosted by the Institute for Irish Studies and ‘Commemorating Partition and Civil Wars in Ireland, 2020-23’. The paper – ‘Toward an Environmental History of the Irish Revolution’ – was recorded by Real Smart Media and is now available as a podcast on History Hub.

In Praise of Forgetting, Historical Memory and its Ironies

David Rieff is an independent writer who has reported on bloody conflicts in Africa, the Balkans, and Central Asia. He is the author of many books, including The Reproach of Hunger: Food, Justice, and Money in the 21st Century (Simon & Schuster, 2015) and, most recently, In Praise of Forgetting: Historical Memory and Its Ironies (Yale, 2016) .

In October 2017 Rieff visited Queen’s University Belfast to give a talk based on this latest work. The talk was jointly organised by Commemorating Partition and Civil Wars in Ireland, 2020-23 and the Belfast International Arts Festival.

The Scholarly Legacy of Eoin MacNeill

Portuguese Diplomacy in Asia and the Global Renaissance